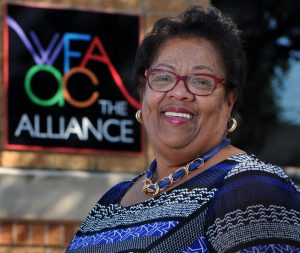 Americans for the Arts today announced that Margie Reese, Executive Director of the Wichita Falls Alliance for Arts and Culture, will be honored with the Selina Roberts Ottum Award at Americans for the Arts upcoming Annual Convention in the Twin Cities, Minnesota. This award recognizes an individual working in arts management who has made a meaningful contribution to his or her local community.
Reese is a life-long advocate for access to the arts. She has more than 40 years’ experience as an arts administrator, more than 17 of those heading a local arts agency. Reese’s reputation as an arts leader was established within some of the field’s largest public institutions, including service as Director of the Office of Cultural Affairs for the City of Dallas and General Manager for the City of Los Angeles Department of Cultural Affairs. Her expertise was tapped by the Ford Foundation to advance cultural projects in West Africa – her portfolio centered on cultural policy development and conservation of West Africa’s cultural heritage.
Today, she serves the Wichita Falls Alliance for Arts and Culture as its executive director. Reese is an adjunct faculty member at Goucher College and actively mentors arts leaders across the country. She has served on boards of numerous organizations, most notably as a 25-year member of the board of Americans for the Arts. A native of Baton Rouge, Reese holds a Bachelor’s from Washington State University and an MFA in Theater from Trinity University.
The award ceremony will take place during Americans for the Arts’ Annual Convention in the Twin Cities, Minnesota, on Saturday, June 15, from 10:45 a.m. to 12:15 p.m.
The five other leadership award recipients are:
“These tremendous leaders have distinguished themselves as passionate advocates for the arts and arts education,” said Robert L. Lynch, president and CEO of Americans for the Arts. “They have implemented innovative and transformative programs to strengthen the communities they serve and build recognition for the important work of the arts. Their unwavering commitment to local, state, and national support for the arts is deserving of this recognition.”
Americans for the Arts’ Annual Convention brings together arts and community leaders to network and discuss strategies for building stronger towns, counties, and cities through the arts. What started as a small group of 45 people in 1955 has now grown to more than 1,000 each year and continues to grow 10-15 percent annually.
###
Americans for the Arts is the leading nonprofit organization for advancing the arts and arts education in America. With offices in Washington, D.C. and New York City, it has a record of more than 55 years of service. Americans for the Arts is dedicated to representing and serving local communities and creating opportunities for every American to participate in and appreciate all forms of the arts. Additional information is available at www.AmericansForTheArts.org.
The Wichita Falls Alliance for Arts and Culture exists to strengthen and promote arts and culture in Texoma; build enduring bonds among diverse communities; position the city as a regional leader for arts activity; and to make the arts more accessible throughout North Texas.
Media Contact:
Ann Arnold-Ogden
aogden@wichitafallsarts.org
(940)500-4453
X