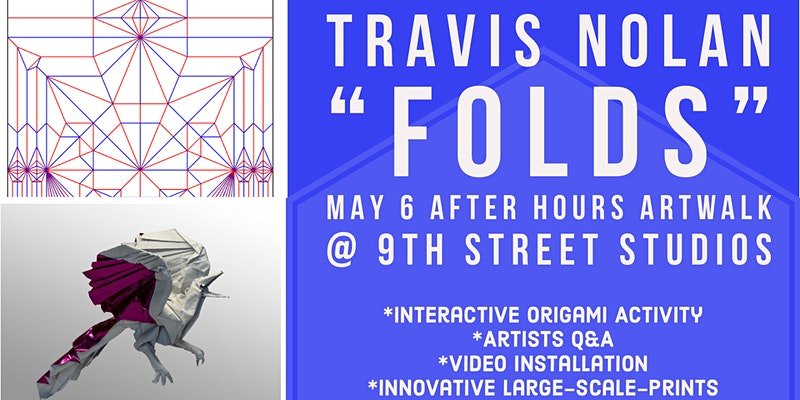 Join us for an Artist Q & A, Gallery Tour and interactive activity with nineteen-year-old Dallas origami artist, Travis Nolan! His original designs are models folded from a single square sheet of paper, without using cuts or glue. The exhibition will include largescale prints of his fold patterns, video installations, and interactive elements.

Travis began folding origami at the age of seven, when he learned a few simple models from his father, and later from friends. Interested, he began to look into the art form, and was blown away when he saw pictures of intricate folds from artists like Satoshi Kamiya.

Travis now specializes in 22.5 degree design of prehistoric creatures, thanks to his interest in paleontology. Travis is in the process of creating a book of diagrams to fold some of his models. He is attending Southern Methodist University in Dallas, where he is majoring in biology and geological sciences, and intends to pursue a career in paleontology. When he is not folding origami, Travis is digging up the fossils of 287 million year old animals with the Whiteside Museum in Seymour, Texas.