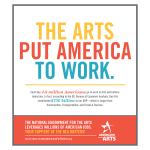 As Congress and the Trump Administration prepare the federal budget for Fiscal Year 2018, Americans for the Arts is working to remind our elected officials about the economic importance of federal funding for the arts, specifically through the National Endowment for the Arts. This morning, ads appeared in the New York Post and The Hill newspapers with the bold headline “The Arts Put America to Work.”

The ads went on to read:

“Each day, 4.8 million Americans go to work in Arts and Culture industries. In fact, according to the US. Bureau of Economic Analysis, the Arts contributed $730 billion to our GDP—which is larger than Construction, Transportation, and Travel & Tourism.”

Last week, in the Americans for the Arts Mobilization Center, we released a statement on Arts, Jobs, and the Economy. “While America is in a time of deep political division, there is little disagreement about the importance of supporting jobs and strengthening the economy,” the statement reads.  “Americans for the Arts has a clear and welcome message for the President and Congress: because you care about jobs and the economy, you can feel confident about investing in the arts.”

Take action with Americans for the Arts to ensure that the Administration hears from you. Sign the Arts Action Fund Petition to President Donald Trump, asking him to be a pro-arts president and opposing any weakening of the National Endowment for the Arts.

Americans for the Arts Statements: The Arts Put America to Work
X